Freedom is not Free

Greg was born in Los Angeles in 1961. While in high school, he was a foreign exchange student and lived in Norway. He graduated from high school in Manhattan Beach and graduated with honors 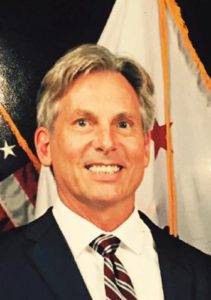 from the University of Southern California with a Bachelor of Science degree in business administration and an emphasis in financial management.

Since 1987, Greg has made his home in Carpinteria. In 1991, Greg founded the business which is now known as Gandrud Financial Services Corporation. Greg manages tax and business services, wealth management, trust administration, and real estate  investments for clients in fifteen states and five countries. During “tax season”, Greg is extraordinarily busy, often working 80-hour weeks for three months in a row.

Since 1999, Greg has represented the First Supervisorial District for the Santa Barbara County Republican Party. After having served as Treasurer, Secretary, and First Vice-Chairman, Greg was unanimously elected Chairman in 2008 and unanimously re-elected in 2010.

In November of 2002, Greg was elected to the Carpinteria City Council. He served on the Finance Committee and as the city’s representative on the California Joint Powers Insurance Authority, the Multi-Jurisdictional Solid Waste Task Force, and the City-County Affordable Housing Task Force.

Since 2004, Greg’s home in Carpinteria, which he shares with his spouse, Marllus, and their Beagle, Gracie, has been an environmental showcase. Because of its edible landscape, vermiculture, and permeable hardscape, it has been featured twice on the Sustainability Project’s Parade of Green Building.

In 2005, Governor Schwarzenegger appointed Greg to the California Recreational Trails Committee. The CRTC had oversight over all the hiking and equestrian trails in our state. Greg is a past Chairman of the Committee. As an avid backpacker, he has had a life-long passion for our natural environment. Greg traveled the entire state for several years promoting trails.

From 2007 to 2019, Greg served as the Treasurer for the educational charity Cars Are Basic which advocates for personal freedom of choice in transportation.

From 2009 to 2019, Greg served as Treasurer of the Anza Trail Foundation and worked closely with the National Park Service and the Bureau of Land Management. The historic Anza national trail runs along the coast of Carpinteria.

In July of 2016, Greg attended the Republican National Convention in Cleveland as an Alternate Delegate for Donald J. Trump representing the 24th Congressional District. Greg volunteered actively for the Trump campaign at both the state and local level and is very excited to be part of the political movement that is putting America first and making America great again.

In October of 2018, Greg formed a 501(c)(3) called Fair Education Santa Barbara http://www.FairEducation.org/ which has retained attorney Eric Early and has sued the Santa Barbara Unified School District and Just Communities Central Coast for spending scarce tax dollars on anti-American curriculum that is prejudicial against white people and teaches students that white male Christian capitalists are oppressors. Greg serves as Treasurer of Fair Education Santa Barbara and advocates for students of all backgrounds to be treated equally and to be provided the best education possible.

In February of 2019, Greg was elected Treasurer of the California Republican Party and has exercised responsibility for a 36 million dollar election-cycle budget supported by over 24,000 donors.

Greg served in 2020 as a Delegate for Donald J. Trump representing the 24th Congressional District and is a Presidential Elector.

Greg serves as an Honorary Chair of Rescue California which seeks to recall Governor Gavin Newsom due to his horrible mismanagement of California.

On February 21st, 2021, Greg was unanimously re-elected as Treasurer of the California Republican Party.

Theme by Anders Noren — Up ↑